In 2008, Joel Moss Levinson became the first person in the world to make his living exclusively from winning online video contests. For 6 years, he has been supporting himself and now his wife and child with his funny, often musical and frequently silly videos. He’s been featured on the front page of the New York Times, been a guest on the Tonight Show and been profiled in news sources from Gawker and Access Hollywood to CBS News with Katie Couric.

Joel dressed as a penguin during a trip he won to Antarctica. 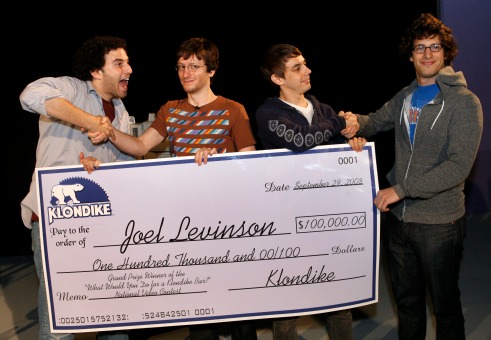 Joel receiving a giant, novelty check from the members of the Lonely Island

Joel’s background in the world of internet advertising has helped him to understand the fast paced comedy that it takes to capture attention on TV, the internet and mobile platforms.

Below are some examples of Joel’s work